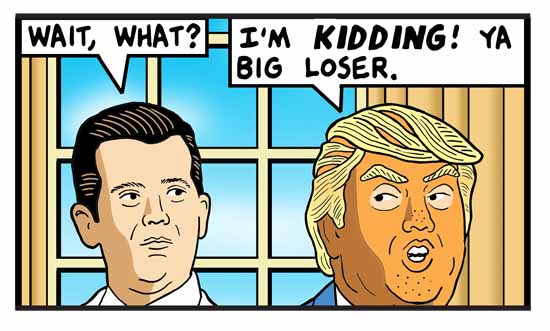 Going to try to start updating the old blog again, if only with links to each week’s new toon!

The latest: another week in hell.

Okay, I say this every week, but man it is impossible to keep up lately. I rewrote this one late in the week to include the reference to the pipe bomber, and then rewrote what I had already rewritten to include the synagogue shooting. And there was a third incident this week, when a racist gun nut shot two African Americans at random in a grocery store, that I didn’t even have room to include.

This was a genuinely terrible week in America. It seems like everything I’ve been watching, thinking about, writing about for a quarter century is all coming together in some perfect storm of awfulness, and I don’t know how we claw our way out of this. We better hope Democrats at least take back the House in a couple of weeks, because I don’t know what this country is going to look like in two years if they don’t. No, that’s not quite right — I have a good sense of it, and it’s not pretty.

There’s a famous line, often misattributed to Sinclair Lewis: “when fascism comes to America it will be wrapped in the flag and carrying a cross.” What I didn’t quite see coming is that it would literally embrace the symbols and antisemitism of Nazi Germany. The President of the United States now openly calls himself a “nationalist” and denounces “globalists.” I don’t know if he’s even smart enough to understand what he’s saying, or if that weasel Stephen Miller is just whispering sweet nothings in his ear that he then waddles up to the podium to repeat because he likes the sound of them, but the effect is the same either way. The worst people in the country now feel revved up and empowered. Deranged, hate-filled lunatics go on YouTube and find out how to construct pipe bombs. Gun nuts with their precious AK-47s decide to strike a blow against an imaginary Jewish conspiracy (to overrun the country with scary dark-skinned foreign invaders), and gun down a bunch of senior citizens gathered to celebrate a young child’s rite of passage. Trump didn’t create the conditions and the hatreds which made the events of this last week possible, but he sure as hell stokes the fire and basks in its warmth.

Wish I had a more positive note to end on, but I’m just worn out by all of it.

(This was, admittedly, not the most uplifting essay I have ever sent out to the list…)